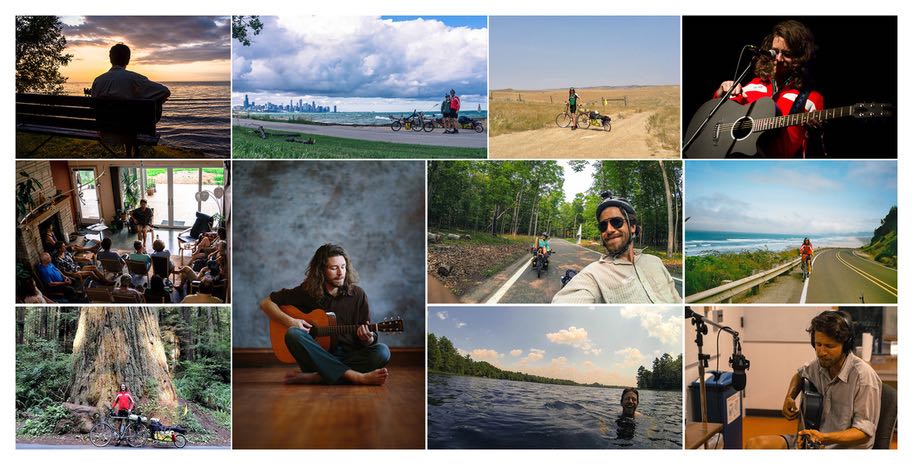 Born in rural Minnesota and raised in Minneapolis, Paul Doffing grew up enamored with the acoustic and electric guitar, sang in his school's choir and took music classes throughout his schooling . At the age of 12, armed with a pawn shop guitar that his father helped him tune, Paul began playing along with Creedence Clearwater Revival's Born on the Bayou. "I replayed the song over and over again, trying to make my guitar sound like the one in the song. I was so enamored with that dominant 7th chord!"  Playing be ear quickly became Paul's preferred method of learning to play the guitar.

Over the next decade Paul explored rock and roll, blues, British and American folk music, finger-style guitar, jazz and classical music. Paul's first serious original project, a rock band called Citizen Sage, had some success when their debut hit the CMJ Charts at #14. Paul recalls, "That album being positively reception definitely made my dreams of being musician seem possible in a way that they never had before. I knew I was still growing as a songwriter."

A few years later, in 2012, Doffing released his first full length solo album, Blossom is You. The album was well received, and, after touring briefly in his old Toyota Camry, Paul had a bit of an epiphany. "I was reading Mahatma Gandhi's biography and wondering how I could use my life to better serve the greater good. I had commuted a lot by bicycle in Minneapolis and I thought: wait, could I just tour by bicycle instead? It was worth a try."

So, in July 2012, after a lot of preparation and stretching Paul began pedaling on what he called the Freedom From Fuel Tour - bicycle music tour aimed at promoting alternative transportation and reduced dependence on fossil fuels . Pedaling his bicycle with his guitar, camping gear, food and supplies, Paul spent 6 months, pedaling 5,000 miles (8,000 km), and playing over 30 shows across the U.S.

Paul has continued to tour in this manner, covering more than half the distance around the circumference of the earth: 12,500 miles (20,000 km) on his bicycle since 2012.   He has pedaled his bicycle across 22 states and through 7 countries. He's battled illness and fatigue, and he's been so hungry that he was once cut off from eating any more pasta at an all-you-can-eat pasta buffet. But it's all worth it to Paul; his unconventional tour vehicle allows him to leave as small a carbon footprint as any emerging artist today.

Paul Doffing’s work unfolds naturally- new, while familiar enough to have been written long ago. Doffing’s epic bicycle-music tours have long included an element of activism and the origin of that activism is the focus of his new album, Songs from the (quaking) Heart. The album examines the process of finding peace in the midst of the whirlwind of challenges that are present in modern life. His style blends instrumental elements akin to guitar maestro Leo Kottke with intimate and articulate songwriting in the vein of Neil Young. Many of the concepts on Songs from the (quaking) Heart were informed by the work of Mahatma Gandhi, Thich Nhat Hanh and the writings of ancient Zen masters.